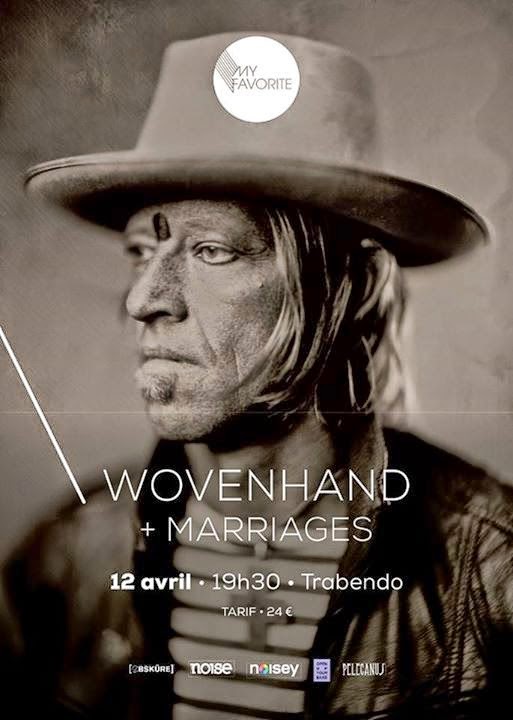 Last Sunday, the city of Paris and Le Trabendo was once again blessed to host yet another evening with David Eugene Edwards and the boys from Alternative Country/folk rock act Wovenhand from Denver, Colorado, on tour promoting their latest record released last year through Glitterhouse and Deathwish Inc . As the evening passed and the start of the show drew nigh, the venue ended up filling up with quite an impressive amount of fans, so I hastily made my purchases at the merch stand before heading into the pit to save myself a good spot. 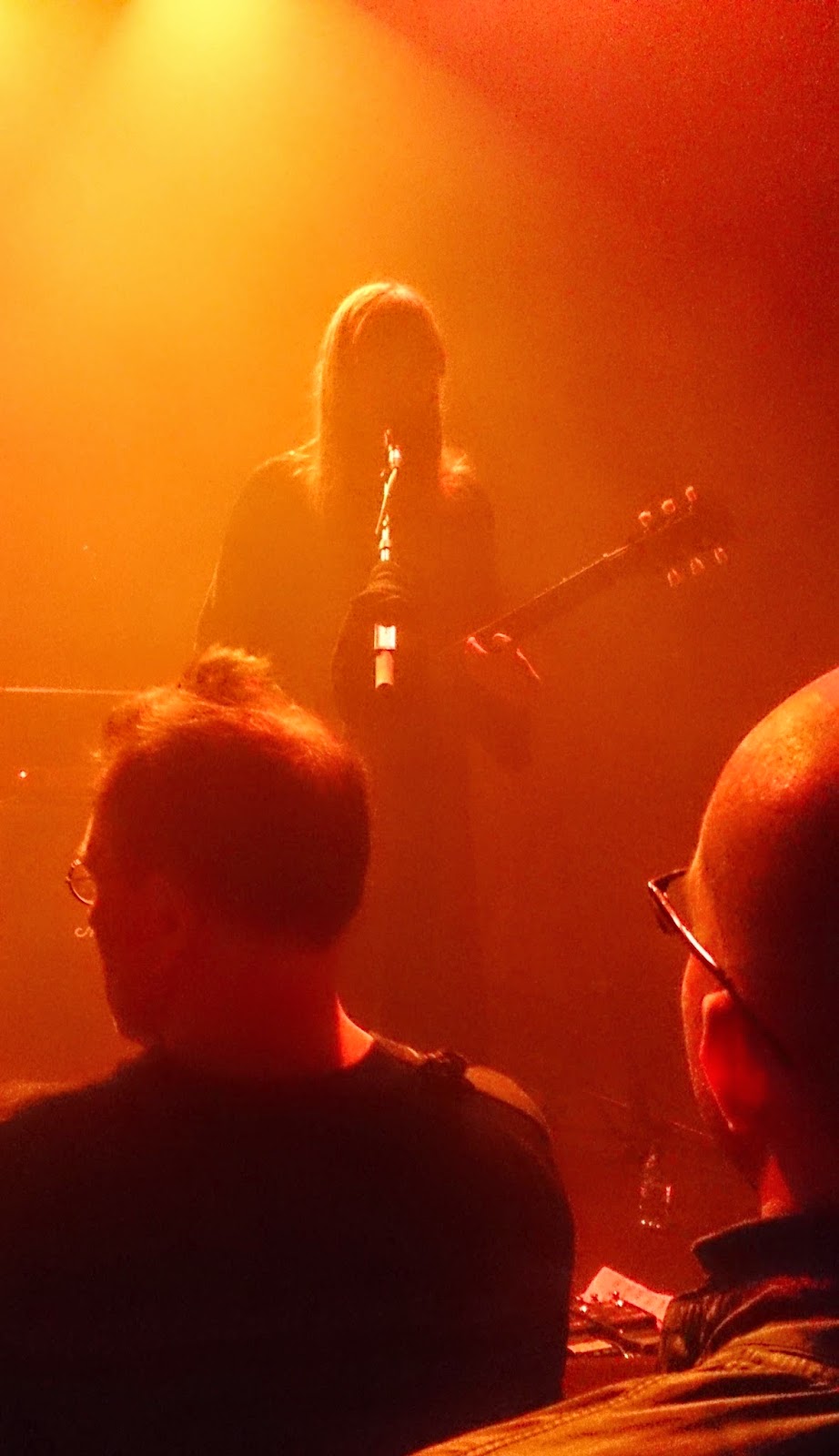 Joining these Colorado cowboys on this current tour were another band I had been eagerly waiting to see, the Los Angeles band known as Marriages, featuring one of my favorite female vocalists, Emma Ruth Rundle, whom I got the opportunity to interview before the start of the show. This current tour marked the bands' first set of European dates, offering fans an opportunity to hear songs off the bands' debut album Salome, released earlier that week.
The L.A. trio stepped to the stage at 8pm sharp, greeting the audience with a timid and all too humble "Hello, we're Marriages. We're gonna be playing some songs then Wovenhand are gonna come on" before getting right to business. The band started off their set with the swelling shoegazy sounds of "Ride in my place", the opening track of their debut EP Kitsune, from which only 2 tracks will be played tonight, dedicating the rest of the set to the bands' latest release.
A few moments into the start of the set, my attention was drawn towards the quality of the overall sound, which was arranged and blended into a pretty clear and organic mix. The drum set was set up with a nice, punchy kick tone which blended and locked in nicely with the bass guitar, serving as a solid rhythmic layer on top of which Emma added her shoegazy guitar and her beautiful, emotionally gripping reverb-heavy vocals. There were few instances during which the guitar sections were a tad bit buried by the other instruments, though they did little to undermine the overall quality of the show.
The setlist also got to showcase the bands' few readjustments to their sound: whereas the bands' EP mainly drew  from shoegaze and post-rock, the debut album tones down the linear, compositional formula in favor of more traditional "song" structures, with the addition of subtle hints of metal and influences from Emma’s recent solo work.
Every song was superbly rendered live through the bands' terrific performance, making for a set full of melancholic, soothing passages gradually swarming up into epic, magnificent sonic tempests. After such a great show, my guess is that we've yet to hear the last of Marriages, as we'll most likely be seeing "Salome" featured on quite a few year-end lists... we'll just have to wait and see! 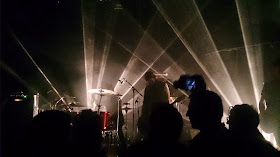 After a short intermission, the time had come for the Colorado Cowboys from Wovenhand to come forth to the stage. The lights dimmed down and out came the magnificent 4, with frontman David Eugene Edwards looking as serious as ever, sporting his signature brimmed hat. The set kicked off with the rockin' riffage of "Good Shepherd" off of the bands' latest album, Refractory Obdurate, prominently played during the course of the evening.
With their latest album, the bands' sound shifted towards a louder, heavier sound with a more prominent use of distorted guitars, a sound that the quartet decided to adopt for every song on the setlist, old as in new, offering a freshly revised rendition of some older tracks. This came as quite a surprise to me at first, and I was absolutely blown away by how heavy they were compared to their more acoustic-driven studio recordings. The vocals also received a fairly different treatment compared to the studio records, David Eugene Edwards' deep, soulful voice going through a band-pass filter centered on the medium frequencies to give a strong low-fi radio distortion quality to the sound. Strangely enough, I would say that some of the amped up renditions of the older tracks added an interesting post-punk vibe to the songs, as if Joy Division had gotten into a time machine and landed up in the dusty old' wild, wild west, at the time of cowboys and Indians.
In terms of overall sound, the mix was absolutely stellar, near-flawless, with yet another thick, punchy kick drum sound combined with an intense bass guitar tone that was both loud and heavy while retaining crystal clarity on each and every note. The guitars and vocals fitted the overall sound impeccably and every instrument stayed intelligible during the entirety of the set. 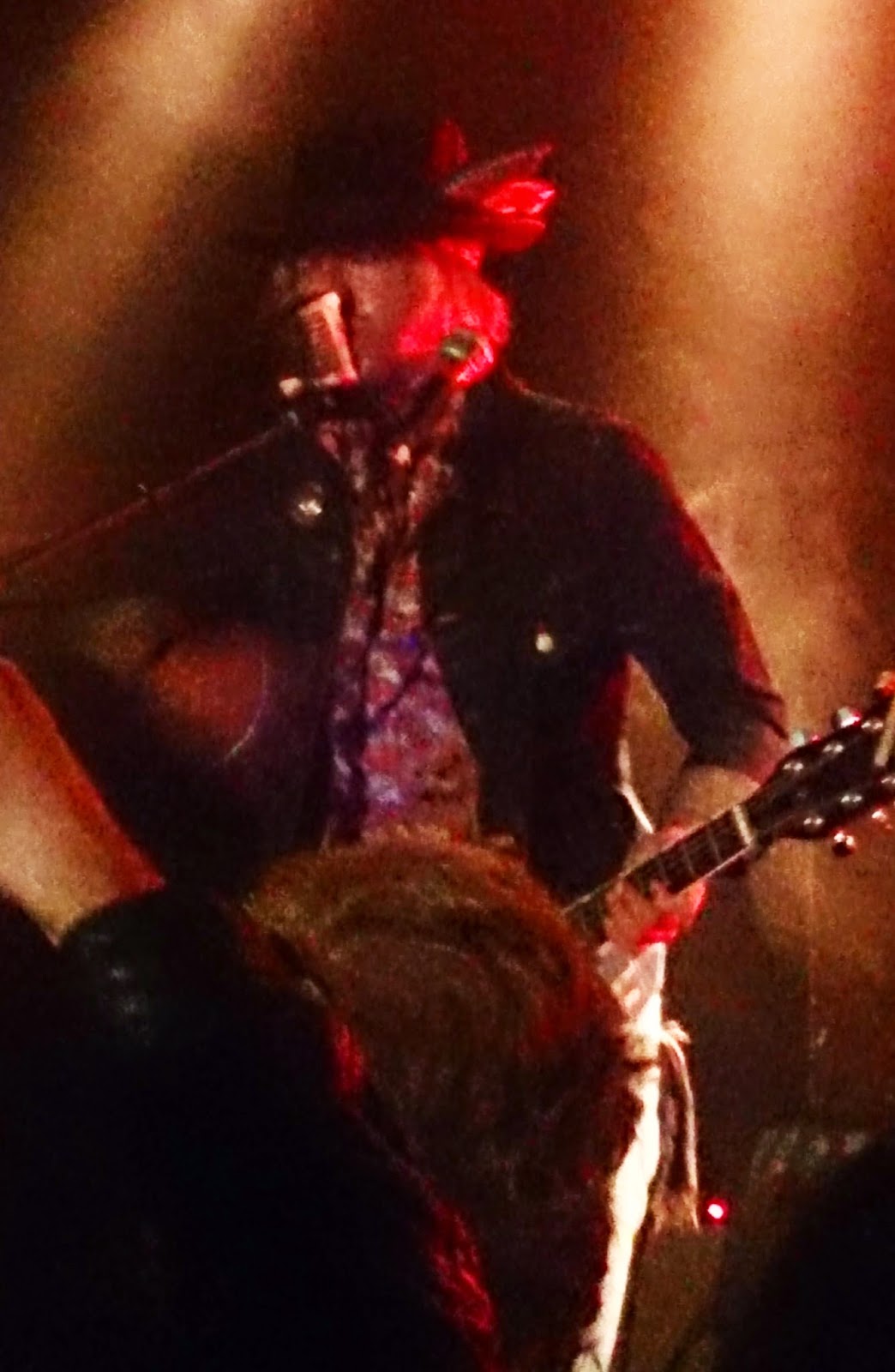 Occasionally some of the songs would mark some downtime, with the whole instrumentation taking a step back and leaving the spotlight to frontman David Edwards' haunting voice and his immense charisma to shine through in its full radiance. Over a steady tambourine beat, the man seemed to grow deeper and deeper into a trance, waving a few hand and head gestures in between guitar strokes like an apache chief, captivating the whole audience with his aura and charisma. I would occasionally wake back to my senses only to realize that 5 full minutes had flown by, having been completely sucked into the frontman's shamanic trance, channeling the spirits from beyond.
After finishing up their set with the climactic "Salome", the band returned for an encore with "Glistening black". Wovenhand then stepped off stage, the lights and P.A music came back on, signaling that this magnificent evening had come to close... Or did it really? While some audience members walked away, a good deal of the front row started cheering for what seemed to be a hopeless plea for yet another encore. 5 minutes went by and finally David Edwards stepped back onto the stage to our great surprise, armed with his antique mandolin, and proceeded to play breathtaking, 13 minute solo cover of Bob Dylan’s' "As I went out one Morning". A terrific way to end the evening.

As an avid concert-goer, I dare say that I've seen quite a number over the years, but nights like these only come around come around rarely. After a performance such as these, one can only leave the show desperate for more from both of these bands. For all of them lucky Hellfest 2015 ticket holders, Wovenhand will be bringing their show to the Valley on Friday. As to Marriages, one can only hope the band comes back quickly for another set of European dates. So far this gig easily reaches my top 3 concerts of 2015.

Thank you to Vince from Kongfuzi booking, Sébastien from Differ-ant, Sargent House as well as the band Marriages for their support and hospitality without which neither this article nor the interview would've been possible.
This gig was brought to us by My Favorite.
Be sure to check out and subscribe to My Favorite Booking for updates on their upcoming shows
http://myfavorite.fr/
Facebook
https://www.facebook.com/myfavouritebooking