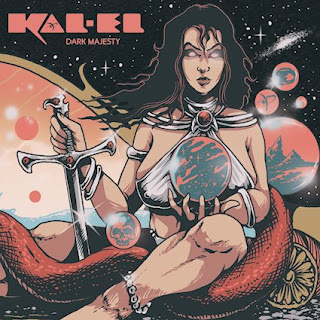 Kal-El have long been cult stoner rock favorites. Their doomed sounds and crushing guitar tone has always set them apart from the pack. Hell - they even got a message of approval from Tony Iommi himself! Their latest record, Dark Majesty, due out in a few weeks on the upstart, Majestic Mountain label, is a masterful next step for the band full of massive vocals, huge riffs and an overarching sense that this band is going to remain one of a kind as long as they wish to keep on cranking out new tunes left and right.

Dark Majesty excites with the bombast of the music and the larger than life imagery that colors the sonic universe of this band. Tracks like 'Hyperion' are grandiose in scope, but more importantly, feel grandiose in scope. You really get a sense for just how huge this band is and all that they really manage to accomplish with the overarching vision of this music and how they carve out new sounds. Dark Majesty is a record that invites you into the broad facing visions of a dark world and leaves you in awe. The power of the execution and the vision behind these songs is exciting. It's exactly the sort of thing stoner fans long for.

This all being said - Dark Majesty is a loooong record. Well over an hour I almost wish this was two separate albums. It would make it quite a bit easier to digest and really revel in. As is though, this is an exciting proposition and one that definitely will keep devout fans of the genre coming back. Even stoner rock newbies will find something to love, especially with some of the shorter more rocking tracks like 'Spiral.' This is a powerful offering - losing yourself in the heaviness is a delight. Press play and dive in.