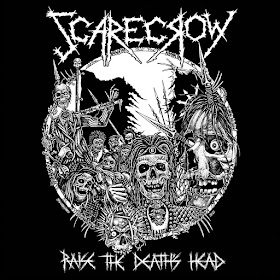 I love the extent to which at this point in his career, Matt Harvey is just having fun. Such is the magic of Scarecrow, a band he reunited over the pandemic to record a killer three song EP that acts as a tribute to classic thrash metal. Featuring Harvey alongside Damien Sisson and Will Carroll alongside former Exhumed drummer Bud Burke, Scarecrow is a very fun listen, especially for fans of classic 80s thrash. The playing is high speed and hectic. It's a whole lot of fun and showcases a different side of things for Harvey in particular.

It's frankly impressive to see how nicely Harvey is able to pull off the semi-clean thrash metal vocals that define this record. The fact that someone who is already seen as such a talent in the world of death metal vocals was able to stretch himself to do classic thrash vocals is a little mindblowing. It speaks to just how good a musician he is. Of course - the rest of the band are also excellent, laying down tight and angular grooves on tracks like "Victory?" which is in my eyes the strongest of the three tracks presented here. These songs are angry and ferocious, directly calling out white supremacy and the struggle of our times. It makes for compelling listening.

This is a fun diversion from the main careers of some very cool established musicians. At under 20 minutes long, Raise The Death's Head has extremely high replayability and is guaranteed to keep listeners moshing along. Scarecrow is clearly a labor of love, but it's a blast to thrash along to the vicious playing that helps to shape tracks like 'Raise The Death's Head.' This may be a tribute to the style, but that doesn't mean you can't have a kick ass time raging along to what Scarecrow have put together here. It's masterful to say the least.