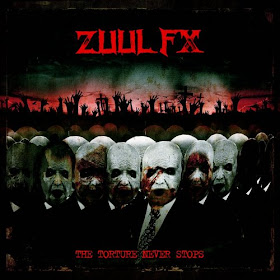 I caught Zuul FX a week ago at Divan du Monde, one of my favorite venues in Paris. After the show I had a word with their best who was wonderfully clad in a Suicide Silence shirt and managed to snag a cop of their new record The Torture Never Stops. A stunning industrial death metal record that brings in a variety of new and exciting elements into a distinct and powerful sound Zuul FX have been able to create something truly special with this album. Though the band has been around for nine years, I feel pretty confident in saying that The Torture Never Stops  is their best record yet.

The first thing that will strike you about The Torture Never Stops is the incredible grooves that rule this record. Songs like, Beat the Crap Out show the wonderful sense of rhythm that defines so much of the Zuul FX sound. More than this, there are all sorts of stunning solos here that while not overly flashy, certainly add a lot of flavor to the music. The mix of cleans and growls is particularly well done. The growls tend to dominate the music and give it girth. Yet the cleans add a bit of taste around the frills, helping to fill out the songs and add a lot of musical interest. Furthermore, this allows the band to play on dynamic contrast and really bring their game forward.

The thing that impresses me with The Torture Never Stops and Zuul FX as a whole is the way that the band craft an incredibly tasty sound. Though their music is not always incredibly technical, there is a certain dedication to meaty and heart jolting rhythms that its hard to ignore the raw power and dirty looks of this album. Certainly not music for the light of heart I think that Zuul FX will be rising fast in the next few years. They've done almost a decade of work to get to this point, and if the triumph of this album is any indication, Zuul FX will soon claim their rightful dominance in the industrial death metal world.