For fans of noise rock and post-metal alike, April 10th certainly was a date to look forward to and an evening to remember. Marking their 5th Parisian date since the start of their career, Chicago-based Post-metal/Post-rock trio Russian Circles returned to the city of love, to a sold-out venue filled with fans eager to see the band perform after 2 years of absence. 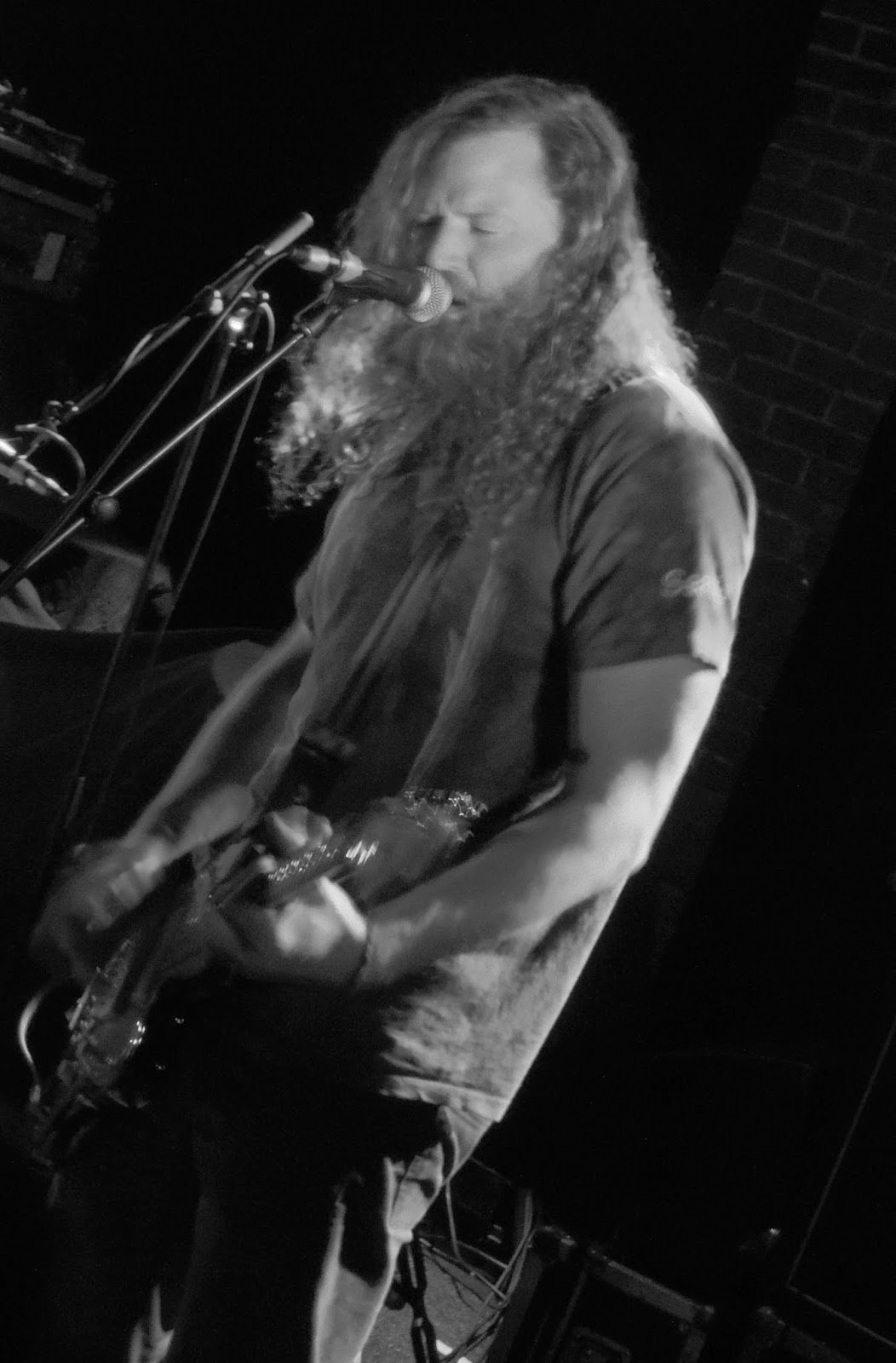 Co-headlining this current tour and warming things up for the evening were Helms Alee, a Seattle based band whose surprisingly fresh formula of noise rock and sludge have earned them quite a bit of praise and recognition. Being that this tour marked their first European tour since their formation back in 2007, this was the night where the trio would need to prove their worth as a live act.
Bearing that in mind, Helms Alee visibly took to the stage with every intention of making their mark on French soil. Drawing influence from noise rock, sludge, shoegaze, post-hardcore... Helms Alee have gathered elements from the four corners of rock music into a truly unique sound of their own, which was on full display over the course of their dynamic 45 minute set.
Every member of the trio shared vocal duties, with guitarist Ben Verellen handling the howling, yelled vocal department, while the bassist and the drummer provided clean vocals, adding some splendid vocal harmonization to the table. The guitar switched back and forth between echoing lead licks and fat, noisy, buzzing guitar riffs nicely complemented by the thick bass sound, pulsating to the relentless battering of the massive drum sound.
Female drummer Hozoji Margullis' performance was simply stunning, adding an extra dose of liveliness to the songs through her powerful and energetic performance.
I did however have one small gripe with one aspect this otherwise great set: I did find the mix for the yelled vocals to be a little dry in the context of the overall sound, making them stick out a little bit from the rest (Maybe a bit of reverb would have smoothened it out?).
In short: As with every band daring enough to think outside of the box, I can't guarantee you'll be falling in love with the sound of Helms Alee. What I can say however, is that you most likely won't be walking away from them feeling indifferent. For this reason, I can only urge you all the more to give this band a listen. With that being said: I, for one, fucking loved it! 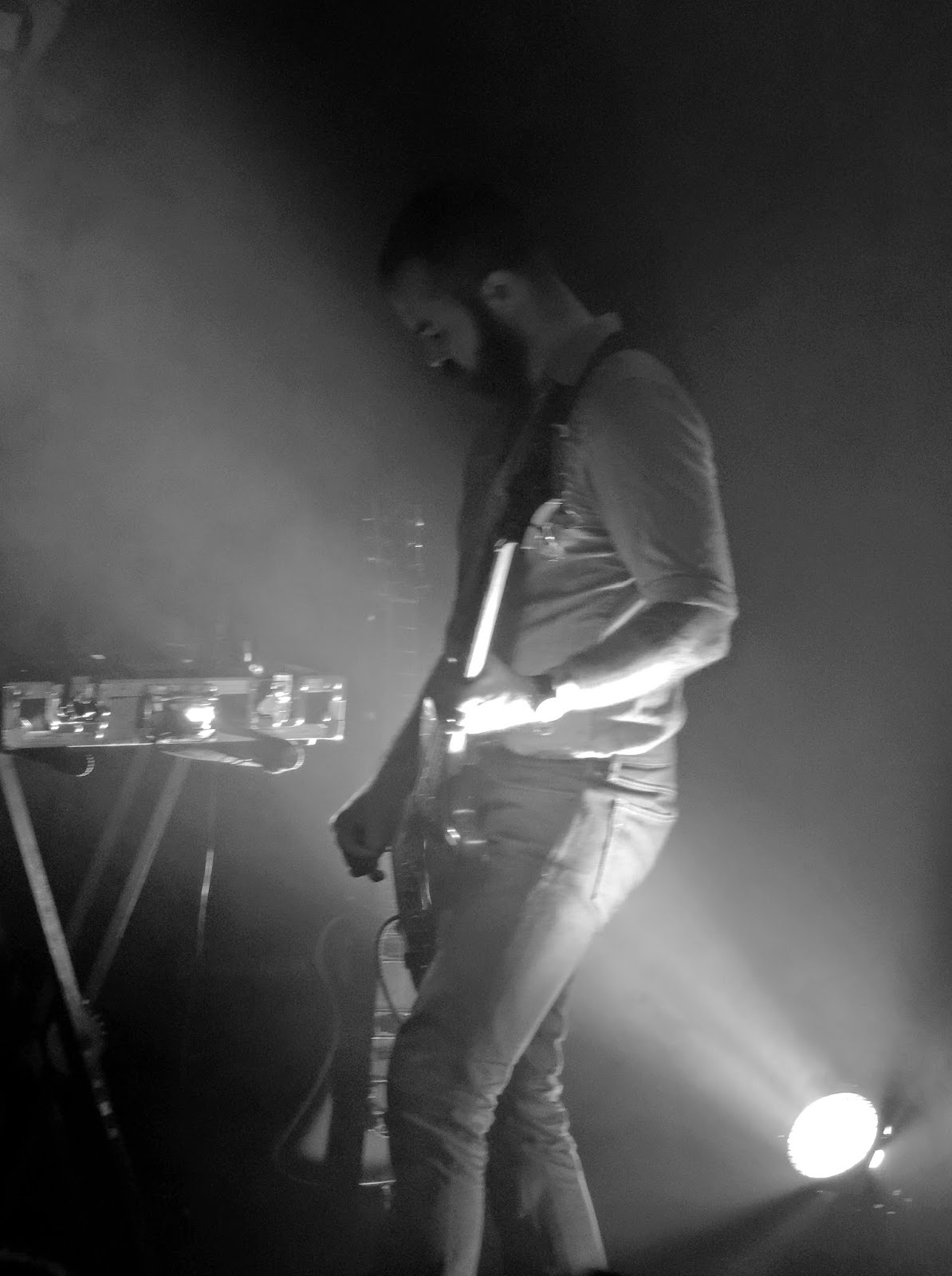 Then came the time for Russian Circles to follow things up with their long-awaited headlining set. Lucky for me, the setlist for tonight consisted of a fairly wide mix of songs from their entire discography, which allowed newer fans to discover the bands' back catalog while pleasing the old-school fans.
For anyone who, like me, were catching one of their shows for the first time, it did not take more than the first couple of songs to understand why the audience of the jam-packed, sold-out venue had been waiting for the bands' return with such eagerness. As the first few notes resonated across the four corners of the venue, the entire audience was swept away, to be taken far, far away to drift across the dark yet beautiful, massive sonicscapes that is the sound of Russian Circles.
The bands' sound was simply colossal, with a massive bass tone supporting the low end section, a top notch heavy, punchy drum mix, and a ballsy yet crystal clear guitar tone. As I mentioned in my previous article, the band has been known for their massive sound, though I did not really get the real picture until I got to stand there, bathing in the comforting sonic vibrations blasting my way.
Through their ambient soundscapes and earthshattering sludge riffs, the bands' sound painted gorgeous, detailed landscapes in my mind, morphing and evolving as the songs and the set progressed. Mike Sullivans' guitar painted the sonic landscapes through his meticulously executed loops and layerings, whereas bassist Brian cook added an immersive sense of depth to the picture and drummer Dave Turncrantz's groovy, dynamic performance provided a living pulse, breathing life into each sonic canvas. With each and every song, a mere spark of imagination would suffice to let you be sucked into the canvas and begin astral projecting across these vistas of darkness and unfathomable beauty.

As tonight’s' show came to a close, our astral bodies gently settled back into our physical bodies, leaving our minds starstruck before what we had just experienced. I left the venue in a relaxed, contemplative mood that night, making use of the subway ride home to settle back into reality. A splendid evening had just ended and I was left with these beautiful images to hold on to until Helms Alee and Russian Circles decide to come back. I urge you to check both of these bands out if you haven't already. For anyone who missed Russian Circles on this current tour, you're not going to want to miss their set at Hellfest this coming summer, trust me.
Robin
Thank you to Vince from Kongfuzi booking for making this review possible.

Be sure to check out and subscribe to Kongfuzi booking for updates on their upcoming shows http://kongfuzi-booking.org/wordpress/programme/
Facebook
https://www.facebook.com/pages/KONGFUZI-BOOKING/100155577922