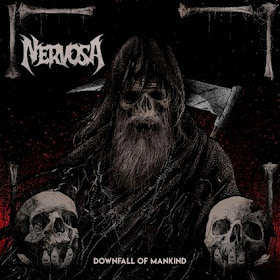 Nervosa have been one of the sickest thrash metal bands in the underground for a long time. These Brazilian maniacs have driven forward with their last two records emphasizing a vicious and fu sound that captures all that makes thrash metal great. Now as they sit on the verge of their third release, Downfall Of Mankind it's hard not to think that these three women aren't about to break through the mainstream. Perhaps their most vicious and grinding release yet, the sort of over the top cut throat release you can't help but to admire, Nervosa have pushed things ever further.

The balls out assault of this record is clear from the first vicious scream on album opener Horrordome. the groups trademark bloodthirst and crunching riffs evoke moshpits the world over. If you're a longtime thrash metal fan the way that this band creates pure sonic punishment rotating around hooky riffs and driving rhythms is going to get you freaking out. The manic and over the top passion that drives Downfall Of Mankind forward only serves to make this into a release that you can't help but to circle pit too. More than almost any other thrash record I have heard this year, Downfall Of Mankind evokes what it felt like to just be getting into metal and loving every minute of it.

There is something delightfully ADD and over the top about this album. The incredibly fierce vocals are counterbalanced with riffs that border on grindcore. You can see the bodies moving with every ripping riff. Fernanda Lira's trademark snarl puts her up there with Tom Araya and Mille Petrozza as one of the great thrash metal vocalists. There is a vicious anger behind this band that can't help but to raise the hairs on your arms. Bodies will fly, people will die and I will love every single minute of this record ten years from now just as I do today. Insane, twisted and un-fucking-relenting Downfall Of Mankind might be the thrash album of the year.