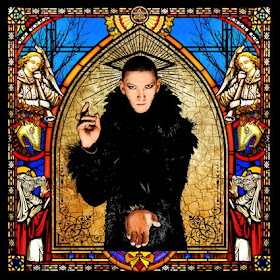 There is something truly special about these OG experimental electronic bands. Acts like Suicide and Kraftwerk have always fascinated me, especially with how they, and the musicians involved evolved over the years. One artist who belongs to this elite crew is <PIG> a musician who never compromised and instead crafted ever weirder music. Risen is a truly strange album and one that is just as addictive as anything else that Raymond Watts has put out. This is the sort of industrial terror that you can't help but to be mesmerized by.

The massive industrial walls of sound that define this record are as terrifying as ever. There has always been something wonderfully alien about the music of Raymond Watts and it feels like this record only builds on that . Simultaneously though you hear the influence of his work with KMFDM but also touches of goth with moments reminiscent of Sisters Of Mercy. There is something weirdly delightful about sinking your teeth in songs as deliciously depraved as Morphine Machine and the harsh commentary of a track like Leather Pig. There is a sort of inherent hostility to Risen that makes it almost terrifying.

<PIG>'s inclusion of a variety of other artists mixing his songs and counterbalancing that with the general sense of depravity means that this is one of his most vital releases to date. One of those artists who seems to only get more nihilistic and magical as he progresses there is a wonderfully bitter appeal here. This is not the sort of music you listen too with a friend or at a club. Rather it's the sort of thing you jam at home as you feel yourself slowly going insane and reveling in the insane lost madness of a record that can't help but to gnaw at your sanity.