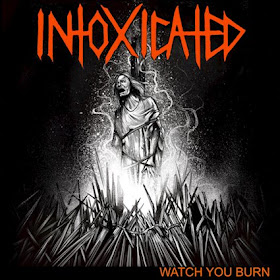 Well this fucking slays. Intoxicated are a one of a kind terror force emerged from the swamps of Florida to craft crushing death metal fury. Watch You Burn is classic death metal magic turned all the way to 11. It's a record that deeply understands its influences and which eagerly laps up the blood of the innocent. Getting lost in the terror vortex that they have created and the circle pit inspiring madness of tracks like "Dumpster Dive" is a delight and speaks to the quality of the songwriting that was brought to the table on this record. It's thrilling.

Intoxicated impress because they don't just pull from the Florida death metal scene either. Throughout this record you can hear elements of classic crossover thrash and even moments of sludge metal goodness. That being said, this album never feels like a hodgepodge of genres, but rather a death metal record with a few thrashy elements and the occasional stoner riff. The clarity of vision though is consistent throughout and speaks to a band who understand the burning magic and terrifying power that metal can have when executed at a million miles an hour and leaving listeners gasping for air in their wake. It's what metal was always supposed to be about and Intoxicated's willingness to borrow from all across the spectrum to distill a razor sharp sound is admirable.

Watch You Burn is an absolute barnstormer of a record and one that I think will consistently push the needle for the band. It's a potent opening statement and one that shows the world a band of veteran musicians operating at the height of their powers. This is a fun ass record for fans of the underground and I get the impression Intoxicated are going to be one of a new breed of Florida metal mainstays. With tight production and sharply honed songwriting, Watch You Burn is a new brand of torment. You need it.